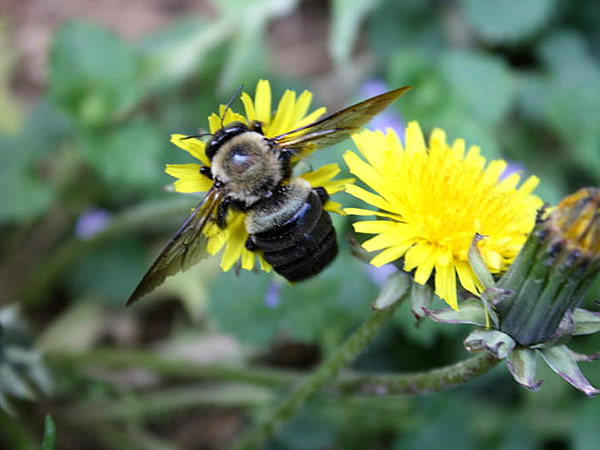 Carpenter bee gathering nectar from a flower in Atlanta

Carpenter bees are very interesting and unique insects who get their name from their habit of drilling perfectly-round nesting holes in wood. In nature, they usually nest in dead trees or dead limbs of trees. But they also nest in wooden structures such as houses, sheds, barns, patio furniture, and playground equipment. Sometimes you can hear their audible buzzing as they drill the holes. It sounds like a tiny buzz saw.

Over time, carpenter bees can do considerable damage and defacement to homes and other wooden structures. A lot of times their activity isn't immediately noticed by homeowners because it's occurring in hidden areas such as behind fascia boards or inside soffits. By the time the homeowner notices the damage, it can be quite extensive.

Sometimes the first noticeable sign of a carpenter bee problem is the frass, or sawdust, piling up under their holes. Other times the waxy stains dripping down the side of a house or structure are the telltale sign. Other times we can simply see the bees drilling the holes. Whatever the case, unless you don't care about what it is they're drilling into, the problem needs to be treated: and no one does that better than we do.

Our approach to carpenter bee removal stresses exclusion more than insecticides. We remove the existing bees, repair any damage they've done, and then seal them out of the house using methods that can include painting exposed wood (to make it less attractive to carpenter bees), caulking, sealing, and screening. Our goal is to literally seal carpenter bees out of your home, minimizing pesticide use and necessary killing of bees. 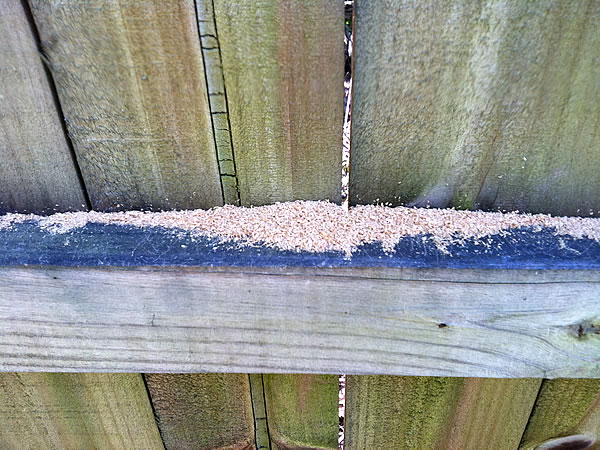 Carpenter bee frass on a fence in Peachtree City

One of the many advantages to our approach is that we really don't want to kill carpenter bees if we can avoid it. Other than their annoying habit of drilling holes in our houses and other wooden structures, carpenter bees are actually very beneficial insects. They are industrious pollinators whose services are vital to our Georgia, Alabama, and South Carolina agricultural economies. They're also important and harmless pollinators of garden plants and flowers.

Unlike honey bees, carpenter bees don't present a serious risk of stinging. The males have no stingers (although they often act as if they did), and the females almost never sting. Exterminators and bee-removal specialists don't even bother wearing bee suits when treating for carpenter bees. Females only sting in self-defense, and even then only rarely.

Male carpenter bees certainly act aggressively, often buzzing or even butting into humans or animals who get too close to active nesting areas. But it's all just a show. They have no stingers, so the worst thing a male carpenter bee can do is head-butt you. So if your carpenter bees are nesting in a dead tree or a structure that you don't care about like an old shed that's ready to fall down anyway, you may want to just ignore them. They do a lot more good than harm.

As stated earlier, carpenter bees rarely sting. But if you're allergic to bee stings, then obviously you need to be more careful about carpenter bees. Even though the chances of getting stung by a carpenter bee are very, very slight, carpenter bee stings can cause serious reactions in people who are sensitive to bee things.

The biggest risk is to young children who may stick their fingers into a carpenter bee nesting hole out of curiosity. This is one of the rare times when female carpenter bees are likely to sting. So if you or your child are allergic to bee stings, you may want to consider treating carpenter bee nests that you might otherwise ignore.

Other than that, the only reason to treat a carpenter bee problem is to protect the thing they're drilling into from damage and defacement. They are otherwise about as harmless as bees bees get.

We provide carpenter bee control throughout Metro Atlanta and the surrounding communities in Georgia, Alabama, and South Carolina. Please contact us for a no-obligation consultation or to schedule an appointment.